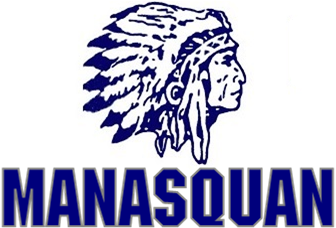 2021 Manasquan Wrestling
Justin Barowski, a former standout wrestler for Pt Beach, and previously an assistant at Pt Boro for the last several years, takes over the reins at Manasquan in 2021. He inherits a team in which the numbers are up as a result of just about everyone from last year's team returning, some newcomers to the program, and some upperclassmen returning to the lineup after missing last season.
Squan has their most experience returning in the stretch from 120-145. Senior Peter Berlin enters his 4th year in the starting lineup, and has won at least 14 bouts in each of his first three seasons. Junior David Lisk went from four wins his freshman year, to a team-best 22 in 2020. His breakout season culminated with a 2nd place finish at the D21 Tournament. Juniors Kieran Pastelak, Jake Edwards, and Jose Avila are all returning starters and looking to take the next step forward in 2021. Sophomore Torey Falkinburg looks to make an impact in the lineup this year after getting some time in behind Berlin and Lisk last season. This group also gets a boost with the return of senior Orlando Osorio, who won 12 bouts in both his freshman and sophomore seasons.
The Warriors did not have very good numbers up top last season, and were often forfeiting several weights. There's a good amount of bodies in the room in those weights this year, so not only should they be able to fill the lineup, but there's some depth here, as well. Junior, Frank Loria is the lone starter from last season at 152-up, but senior Evan Meloro was a 2-year starter, and Jay Hilla was the Warriors' starting heavyweight in 2019. Both rejoin the lineup after missing last season.
With a new head coach, the Warriors are looking to build towards big things. The numbers are much healthier this year, and there is enthusiasm around the program. As a team, there is a good mix of seniors and youngsters in the lineup that will look to compete now, but also be a part of the foundation of building up the program.
Possible Lineup in 2021
Graduated in 2020

Any suggestions, questions, or feedback?